Edward Emmett Dougherty and Arthur Neal Robinson are two architects that have largely been forgotten in their native city, but both men helped design important religious landmarks and other buildings in the early part of the twentieth century.  These men created a partnership that lasted for only a few years, but during that brief period, the two men designed one of Atlanta’s most impressive landmarks: the First Church of Christ, Scientist.

Edward Dougherty was born in 1876 in Atlanta.  Dougherty graduated from the University of Georgia in 1895 and then studied architecture at Cornell University and the Ecole des Beaux Arts in Paris, the leading architecture school in the world.  Dougherty’s architectural education was among the best in the country, and he had a significant number of prominent commissions during his time in Atlanta.  These designs ranged from the Imperial Hotel (1911) and the Druid Hills Golf Club (1912) to numerous residences in Druid Hills and other early Atlanta suburbs.  While the First Church of Christ, Scientist on Peacthree Road is his best known Atlanta work, Dougherty also designed the Druid Hills Baptist Church on Ponce de Leon.  While smaller in scale than the earlier church, the Druid Hills church is another masterpiece of the Beaux-Arts style. 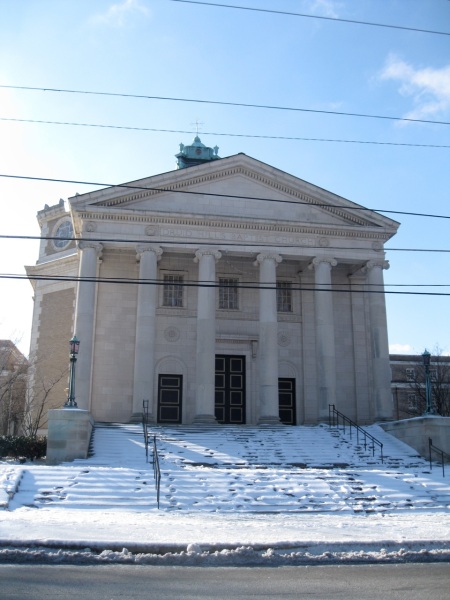 Dougherty left Atlanta in 1918 and moved to Nashville where he finished his successful career. He would become a partner in the firms of Dougherty and Gardner and Dougherty, Wallace, and Clemmons.  Dougherty’s most important Nashville commission is the War Memorial Auditorium, part of Nashville’s Memorial Square which surrounds the State Capitol Building.  This area on Nashville’s Capital Hill area is among the best civic architecture in America.  In 1925 Dougherty’s building received a Gold Medal Award by the American Institute of Architects, the highest award that the AIA can bestow.

Arthur Neal Robinson was born in Atlanta in 1886 to one of the pioneer families of Atlanta. Robinson received his basic education at Hunter’s School for Boys, finishing in 1902, and then enrolled at the University of Georgia.  Since there were no architectural schools in the South, he began working as a draftsman for local architect, Harry Walker.  In 1907 Robinson began working for the prestigious local architect Edward Dougherty soon after his return from the Ecole des Beaux Arts.

Robinson was known as the head draftsman, specification writer, and superintendent during his time with Dougherty.  By 1912 the two men had formed the firm of Dougherty and Robinson. The plans for the First Church of Christ, Scientist were drawn between October 1912 and February 1913.  The landmark, Beaux-Arts church occupies a very impressive position on Peachtree Road at the entrance to Ansley Park.

While most local sources credit Robinson as the primary architect, the church was collaboration by the firm.  While Dougherty was the established architect, Robinson was a member of the First Church of Christ, Scientist. Robinson’s connection to the parish likely helped the firm win the commission.  It is difficult to determine which architect is responsible for the design, and the majority of the drawings were completed by a draftsman with initials “CBS.”  As with most architecture firms, the design was likely a group effort.  Both men would design later churches that are similar to this Peachtree landmark.  The Druid Hills Baptist Church was designed by Dougherty and has many similarities. In 1923 Robinson designed the Second Church of Christ, Scientist in Cincinnati that also resembles the earlier Atlanta church.

While Dougherty remained true to his classical Beaux-Arts training, Robinson was a true eclectic and was progressive for the time.  In 1912 Robinson designed his own home at 924 Springdale Road in the Prairie style and incorporated many Arts and Crafts elements into his designs.  While he would design another Prairie Style home in Druid Hills, he also designed numerous eclectic cottages and homes that cannot be easily categorized.  Using elements of the Tudor Revival, Robison designed one-story cottages for Dr. Frank Huss at 1047 Oakdale in 1920 and for C. S. Carnes 1296 Fairview Road in 1926.   He would continue these Tudor designs throughout his career not only in Druid Hills but also in neighboring Morningside.  Robinson’s reputation grew, and George Willis hired Robinson to be the primary architect for his new city of Avondale Estates.  Based on Stratford-Upon-Avon, Robinson designed the commercial core and community center in the Tudor style. The residence for Lee Hagan at 916 Springdale Road (1920) shows Robinson’s use of the Renaissance inspired work that was also popular at that time. 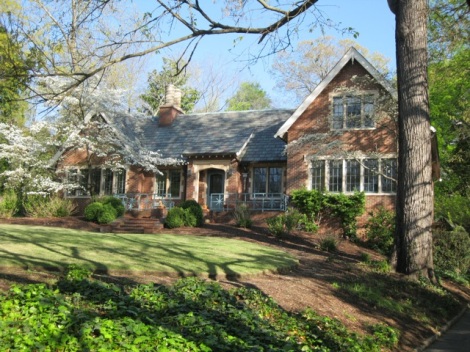 During the brief partnership of Dougherty and Robinson, these two native architects designed one of Atlanta’s primary religious landmarks as well as other significant buildings.  Dougherty’s exemplary education was shared with this junior partner, and the two men produced buildings that are very significant to Atlanta’s early development.  Robinson learned from his well-educated mentor and continued for several decades to design homes that became notable in these early suburbs.  While these men receive little credit today, their work is easily recognizable by the residents of Atlanta’s older neighborhoods.