How did a New York transplant of Cuban descent become the society architect of Sea Island? Francis Abreu was a special talent who had the sophistication and connections to become one of the most important architects in South Florida and the Georgia coast. During the Florida real estate boom of the 1920s, Abreu became the most sought after architect in Fort Lauderdale and then moved to Sea Island to help turn the once remote barrier island into a world class resort.

Francis Luis Abreu was born in 1896 in Roseton, New York, near Newburg. Slightly north of West Point along the Hudson River, Newburgh is a historically and architecturally significant town, and Abreu’s family lived in Danskammer, an antebellum Greek Revival mansion that was an area landmark.

Francis’ mother was the daughter of a wealthy Spanish national, and his father was a Cuban sugar cane planter who had been educated in Spain. Abreu’s first cousin and prominent Atlanta architect, Henry Jova, states “By the middle of the 19th century, the Abreu and Jova families were among the most prosperous families in Cuba.” The Abreu family provided the young Francis with a cultured upbringing that would help his architectural career. During his youth Francis divided his time between Newburgh and Cuba while wintering in Florida and traveling to Spain.

Francis entered Cornell in 1916 to study architecture. He joined the Navy during WWI, served for two years, and graduated from Cornell in 1921. Abreu gained experience working at West Point for several years and two firms in West Palm Beach before moving to Fort Lauderdale. There has been speculation that Abreu worked under the famous Spanish Revival architect, Addison Mizner, but this connection cannot be confirmed.

In 1924 Abreu started his Fort Lauderdale practice at the age of 28 and quickly became one of the city’s most prominent architects. His family provided a wonderful resource for the young architect who needed connections and built projects to attract clients. Abreu’s wealthy family members conveniently provided both. Francis’ grandfather, Juan Jacinto Jova, hired him to design his home that became a prominent local landmark.

While Mizner’s influence is apparent in Abreu’s work, every architect working in the Spanish style in the 1920s would have been compared to Mizner. Mizner was among the first to bring Spanish Revival architecture to Florida; Abreu was part of the second generation that built upon Mizner’s success and continued to develop the style. In addition to his elaborate residences, Abreu designed extensive commercial and civic work including the Fort Lauderdale Country Club, Fort Lauderdale Casino, and St. Anthony’s School.

In Fort Lauderdale Abreu designed in the Spanish Revival style with his own Cuban influence. He was able to improvise and develop a distinct style that was more rustic and less ornate than Mizner. He used architectural details such as towered entrance ways and large arched windows facing the ocean in his early work, and he would continue to develop these themes on Sea Island.

The development of Sea Island began in 1926 when Howard Coffin purchased the island to develop a resort hotel and cottage colony. Coffin originally intended to hire a New York firm to design the hotel but changed his mind after staying in the Ritz-Carlton Cloister in Boca Raton that was designed by Mizner.

In 1927 Coffin sent his cousin and partner, Alfred Jones, to Florida to engage Mizner to design the hotel that would become The Cloister. On his trip South, Jones visited Fort Lauderdale and became familiar with Abreu. Years later, Jones summed up the results of his 1927 visit: “Our first knowledge of Mr. Abreu and his work in Fort Lauderdale was through our impressions of what we saw on our trip in 1927. I remember particularly the public swimming pool set-up, so we looked up the architect. And since South Florida was in a sort of recession at that time, we found that Mr. Abreu was interested in moving up here. As a result of that trip, Addison Mizner was engaged to design the original Cloister Hotel, and Francis Abreu was encouraged to move up to this area with indications that the newly organized Sea Island Company would provide some interesting work for him. …We were particularly impressed with the work Mr. Abreu had done in Fort Lauderdale up to that time and his move to Georgia proved to be very good for both of us.”

Mizner’s national reputation was very important to Coffin and Jones to establish the reputation for their development; however, the developers seemed equally taken by Abreu’s talents and his more rustic style for the cottage development. 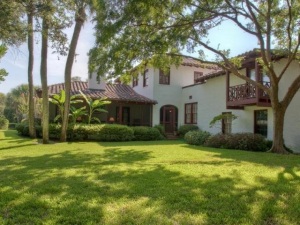 Mizner remained based in Florida and made infrequent trips to Sea Island during the design and construction. Mizner left Sea Island having designed only the original hotel and one residence for Alfred Jones. Abreu moved to Sea Island in 1928 and established an office in Brunswick. Due to the instant success of the hotel, Abreu began designing additions to the original hotel including the River House (1929) and Administration Building (1930). Abreu would continue to design additions to the Cloister for another decade. Additionally, architect Jack Davis recalls that Abreu had a virtual monopoly on residential development at Sea Island until the outbreak of WW II.

Abreu and James Robeson, a 1926 graduate of Georgia Tech, formed the firm of Abreu & Robeson in 1929. The firm quickly became known for its Mediterranean Revival style buildings and homes along the Georgia coast. During the Depression and World War II, the firm also designed public and war housing projects. WWII marked a turning point for the practice of architecture, and, as with many firms, Abreu & Robeson moved from traditional residential design to more modern commercial and institutional work, maintaining offices in both Brunswick and Atlanta. In Atlanta the firm would design numerous Trust Company bank branches, religious works including major additions to the Cathedral of Christ the King, and many hospital buildings including the Infirmary at St. Joseph’s.

To date, only three residences in Atlanta are attributed to Abreu & Robeson; all three are in Buckhead. Local architect Norman Askins worked for the firm briefly in 1972 and has renovated and enlarged two of the houses. These designs were inspired by early American architecture, drawing primarily from Virginia precedents, and were a distinct departure from Abreu’s Spanish work. Askins was very complimentary of Abreu’s work and knew of his artistic ability from seeing original drawings in the firm’s archives.

Although his legacy has been shadowed by the better known Mizner, Abreu became the most important architect of Sea Island and created the basis of the seaside colony that we know today.

3 responses to “Francis Luis Abreu: The Architect of Sea Island”