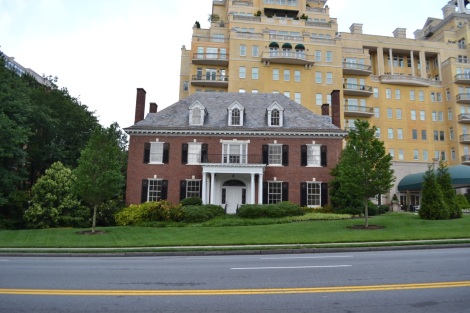 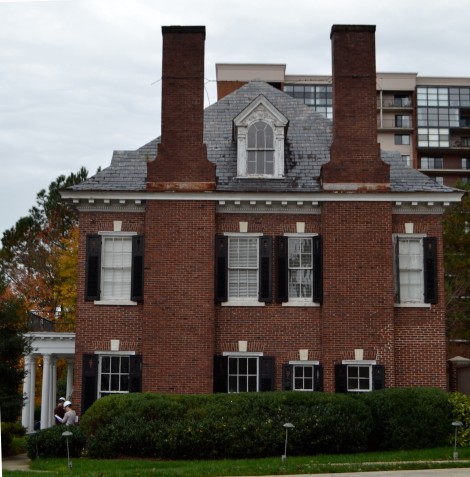 Close up of shutter

All who are the least bit familiar with Buckhead know “that house on Peachtree Road.”  It may be because the Randolph-Lucas House is a wonderful example of the Federal Revival architecture, or it may be because of Anne River Siddon’s Peachtree Road.  However, it is more likely that everyone recognizes this red brick anachronism because this is the ONLY house on Peachtree Road. There was a day when this home stood among its peers and was not an architectural oddity dwarfed by the surrounding condo and apartment buildings.

“Progress” is the Atlanta way, but too frequently that means demolition. The Randolph-Lucas House escaped the bulldozer once in 1988, but it is threatened again.  The 2500 Peachtree Condo Association has applied for a demolition permit and claims that the house is unsafe.  This is the final chance for Atlanta to save its last example of single family residential architecture on Peachtree and for Atlanta’s primary thoroughfare to save what little history and character it has left.

In the early 1900s Peachtree Road was a place of rural retreats, but as the city grew, it expanded north along Peachtree Road.  The Brookwood Station was completed in 1918 on the outskirts of town, and B. F. Burdett began developing Brookwood Hills in 1922.  Planned neighborhoods continued through WWII and established Buckhead as we know it.  As Atlantans drove downtown, they drove along an elegant street with no less than six designs by famous architect Neel Reid.

During the 1970s and 1980s, many houses were demolished to make way for condominiums, apartments, and other commercial buildings.  Peachtree has remained a residential street only by building vertically.  The gracious suburban villas were torn down.

Many attribute the Randolph-Lucas House to Neel Reid, but it was designed by Thornton Marye.  Philip Thornton Marye was born in 1872 in Alexandria and graduated with honors from the University of Virginia. During the early years of Marye’s architectural career, he practiced in Newport News, Virginia, and  Washington, D.C. Marye was a decorated veteran of the Spanish-American War and also served in the First World War.

In 1904 Marye moved to Atlanta to supervise the construction of his design for Atlanta Terminal Station (1903-5). The Atlanta Terminal Station was a pioneering work in reinforced concrete and became the symbolic gateway to the city. This Atlanta landmark was demolished in 1971 for the Richard B. Russell Federal Building. Following his success in Atlanta, Marye was awarded the commissions for the terminal stations in both Birmingham and Mobile.  He also designed the New Orleans Courthouse.  These were some of the largest commissions in the South at the time, and Marye’s achievements were matched by few in Atlanta or the South.

During the Great Depression there was little work for architects, and the Federal Government came to the rescue by calling for measured drawings of certain antebellum buildings.   Marye directed this work in Georgia, and the drawings that were produced are now in the Library of Congress.  He helped illustrate the well known book Garden History of Georgia: 1733 – 1933, which his wife edited. Marye’s work was very important in documenting Georgia’s historic buildings.

Marye is probably best known for the his firm’s design of the Shrine Mosque, now known as the Fox Theatre, when he was a partner in the firm of Marye, Alger, and Vinour.  Marye would partner with several other architects from 1920 until his death in 1935.

Marye designed numerous elegant residences in Atlanta.  Among these commissions were the Epps Brown and Randolph houses in “The Block” section of Peachtree Road between Muscogee Avenue and West Wesley Road.  The Epps Brown house has already been demolished, but fortunately, the Randolph house remains.

Marye’s client was Hollins Nicholas Randolph, a prominent attorney who had been practicing in Atlanta since 1896.  Like Marye, Randolph was also from a prominent Virginia family.  Randolph’s great grandfather had been Governor of Virginia and his great-great grandfather was Thomas Jefferson.  The design was inspired by “Dunlora” in Albemarle County, Virginia where Randolph was born.

While the cost of restoring the home is no small matter, the preservation of the house was part of the deal struck with the original developers of 2500 Peachtree.  This agreement should be honored, and a feasible use for the property needs to be determined.

“That House on Peachtree” serves not only as an architectural aberration but also as a reminder to young and old, newcomer and visitor of another Atlanta.