The lovely Colonial Revival house has been a work in progress since it was designed in 1922 by the locally renowned firm of Hentz, Reid and Adler.  The ouse recived its first addition in 1926 that included a family room on the first floor and bedroom suite above.  The feel and details of the room were consistent with the original home.  The consistency of the design and construction of the house’s first addition was the inspiration for the current renovation.

While there are records of the plans for this house in the firm’s job list, the plans unfortunately no longer exist.  Fortunately, there was a family album that had been passed along to each owner that was a great resource and inspiration for the current owners.

Image of the original design soon after completion. 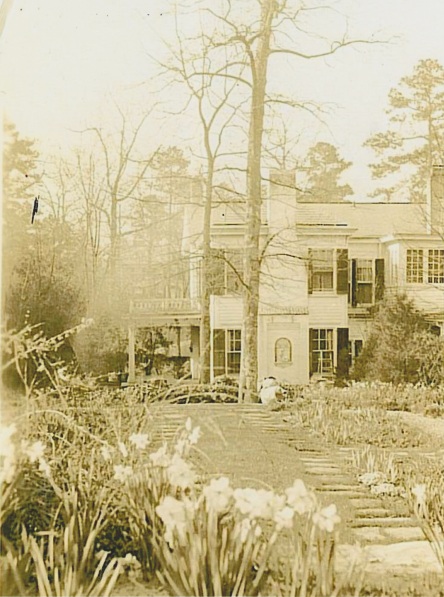 Photo of the rear of the house after 1926 addition. Note the original sleeping porch on the upper, right.

The house was originally built for the Prince Webster family who lived in the home until 1942. The house sat prominently on West Wesley Road and was featured in several newspaper articles during the Webster’s ownership. The house remained essentially the same until 1975, when the owner at that time commissioned architect Kemp Mooney to design a large addition to the house.  Mooney, known for his more contemporary designs, created an addition that was significantly different from the original home. The two-story addition on the rear and left sides of the house included a kitchen with triangular bay, family room, sun room, rear entry and stairs, two bedrooms, hall, and guest bath. Although clad with painted wood and lap siding, few other details corresponded with the original house.

The front after renovation by Kemp Mooney.

This image shows the two story addition designed by Kemp Mooney in the 70s.

In 2006, the Poindexter family selected Stan Dixon to design their renovation. Susan Bozeman was hired as the interior designer, and Revival Construction was chosen as the contractor for the project.

The main goals of the project were to alter the previous additions to fit with the original house, to add modern amenities, and to correct numerous construction and maintenance issues. To accomplish these goals, much of the 1975 addition was removed and rebuilt. The angled side addition was completely removed and the kitchen and guest bedrooms where completely rebuilt.The rear sunroom was removed and replaced with a new porch inspired by the two existing porches. The family room and rear guest bedrooms were largely rebuilt, and a basement was created for exercise and media rooms. The right side porch was in very poor condition and was removed and rebuilt to create a study and master bathroom.Materials were designed and selected to compliment the original house and to create additions that were in keeping with Reid’s original intent. The exterior details of the original house were studied carefully, and the cornice, casing, and windows and doors were built to match the original details. The dimensions and details of the French doors from the 1926 addition were replicated in the doors that were used in the study addition and family room renovation. The flat copper roof of the existing porch was adapted for the rear porch that replaced the previous sunroom.The diagonal railings on the existing porches were removed and replicated. This railing theme was used on the rear porch addition and was applied to the lower sections of the walls for the study and master bathroom addition.The front five rooms of the house were largely intact from the original construction and were used as the basis for the interior details. Custom millwork was produced to match the original details in the front rooms and existing cabinet details were matched and adapted in the design of the butler’s pantry, kitchen, and bathrooms. Where possible, existing materials such as the original copper counter and sink in the butler’s pantry were salvaged and reused. Antique, refurbished hardware was installed on the new doors.These combined efforts provide a continuous feel and look between the original, renovated, and new spaces, and several industry awards recognized the success of the project.

Photo after 2005 renovation.  The one-story porch on the right was removed and replaced by a two-story addition. The addition created room for a library and master bath. The diagonal railings of the original porch were applied to the panels below the new casement windows.

Photo of rear elevation after 2006 renovated designed by Stan Dixon. The rear sunroom was removed and a covered porch was added. The diagonal railing motif was replicated to match the existing porches.

Exterior view with steps from the pool in the foreground. These stone steps were redone to connect with the new bluestone patio that was added in 2006.

The previous kitchen after the 1970s renovation. 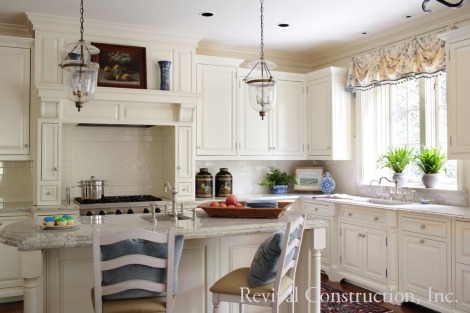 The previous addition was removed and enlarged to incorporate a bay window over the sink and a breakfast room bay. 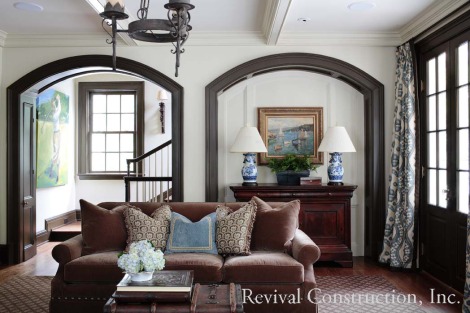 Photo of renovated family room with recessed niche and new secondary stairs. Susan Bozeman was the interior designer for the project.

Interior of the new library addition. 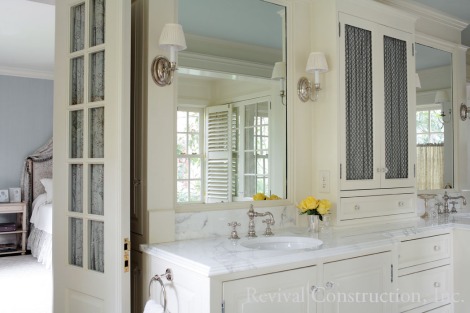 Vanity in the new master bath 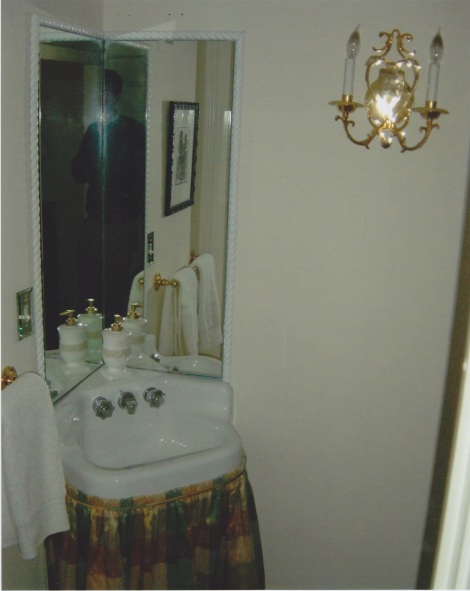 The original powder room was shoehorned under the main staircase.

The renovated powder room with antique mirrors gives the illusion of a much larger space.